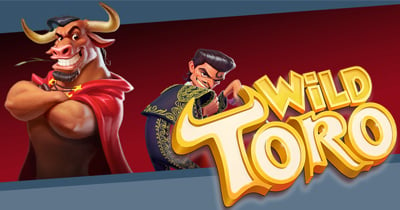 Wild Toro slot from ELK Studios, released in November 2016, is a fun cartoon-style Mexican/Spanish themed slot. If you’ve played Taco Brothers, you will probably remember the nasty Captain Diaz character. In Wild Toro, we meet his sneaky Matador son called Diaz Jr. He will fight with the Wild Toro bull on the reels bringing you a lot of action and unusual features in this delightful game. Keep reading if you want to find out more about the features and how much you can win when playing this slot at the best UK online casinos.

Wild Toro slot is set on 5 reels, 4 rows and has 178 ways to win payout structure with the wins being formed by matching symbols on the adjacent reels from left to right. The higher paying symbols are a red rose, an intricate purple fan and a stagger stubbed orange (!?) as well as three types of coins in gold, silver and bronze. 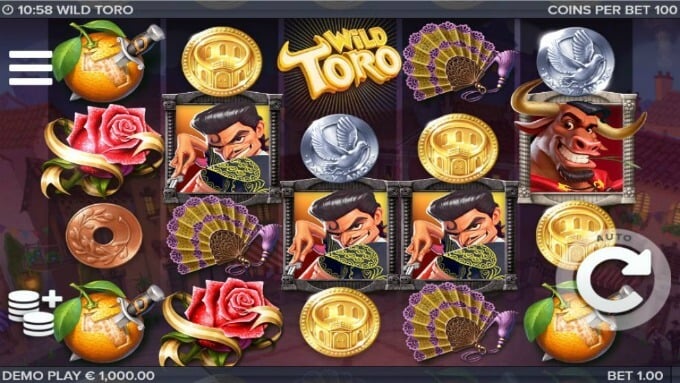 The game logo acts as a wild symbol substituting all the other symbols apart from the bonus symbols of Toro Bull and Matador.

There are 3 main bonus features in this exciting game.

Toro Walking Wild feature is activated when the bull symbol lands on the fifth reel. Toro will start moving towards left-hand side from reel to reel, with every reel move giving you a respin. This will keep going until the Bull reaches the first reel and your total winnings will be calculated.

During the Toro Walking Wild feature, watch out for the Matador symbol appearing on the reels. When Toro sees him, he gets completely bonkers and starts chasing him all over the reels turning every symbol on his way into the wilds. The feature ends when the matador is defeated and disappears from the reels.

Even though Wild Toro slot doesn’t have any free spins or bonus features as such, you can still enjoy playing it at some of the most prominent and reliable UK casinos and receive impressive additional casino welcome bonuses and a lot of extra free spins as well. Don’t forget to click on the links in this review to be able to get your exclusive bonuses from the best UK Casino operators.

You can play Wild Toro slot starting from a minimum bet of 20p up to a maximum bet of £100 per spin. This high volatility action packed slot has a return to player percentage of 96.4% and offers you a maximum win per spin of x2,250 your stake or 225,000 coins.

This is a highly animated and unusual looking game that shows the talent of ELK studio designers in full force. The setup is a small Mexican Village with cute cartoonish characters and a very jolly and funky flamenco soundtrack. The gameplay is very dynamic because the two main characters Toro and Matador come to live when they participate in the bonus features. The game can be played on any device including desktop, mobile and tablet. 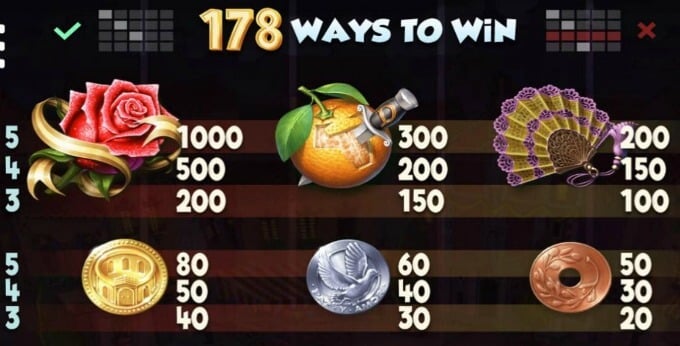 Out of the 13 online slots nominated for the Game of the Year Award during this year’s EGR awards, Wild Toro has managed to win this prestigious award! The slot has competed against other popular slots such as Red Riding Hood by NetEnt and Age of the Gods by Playtech.

We really enjoyed this innovative, engaging and lively slot with unusual bonus features. The Toro Goes Wild is especially entertaining and lucrative. It looks very cheerful, and the Mexican theme is well-executed as sort of a continuation of the Taco Brothers game by the same developer. Despite the lack of free spins the game is still highly rewarding and will fit well especially for those players who don’t mind a bit of risk and proper action. Try it out at one of our carefully selected casinos, and you won’t regret it for sure.