Imperial Opera is an online slot from Play'n GO. Read our review below to learn about this game's RTP, volatility, free spins, and more. 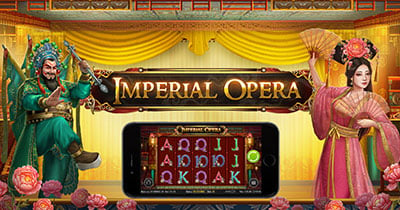 Play N Go has just come up with a new Oriental-themed slot which combines simplicity with a couple of interesting features; Imperial Opera slot is a 5-reel video slot with 20 fixed paylines set inside a decorated Asian opera house. Read our full review below to learn more about this upcoming slot, which is due to be released on the 7th of March 2018, and to find out at which online casinos you’ll be able to play it for free or for real money.

Imperial Opera slot is a 5-reel video slot with 20 fixed paylines featuring 10 to Ace playing card symbols and three character symbols. The character of the princess functions as the wild symbol in this game, and replaces all other symbols except for the scatter. 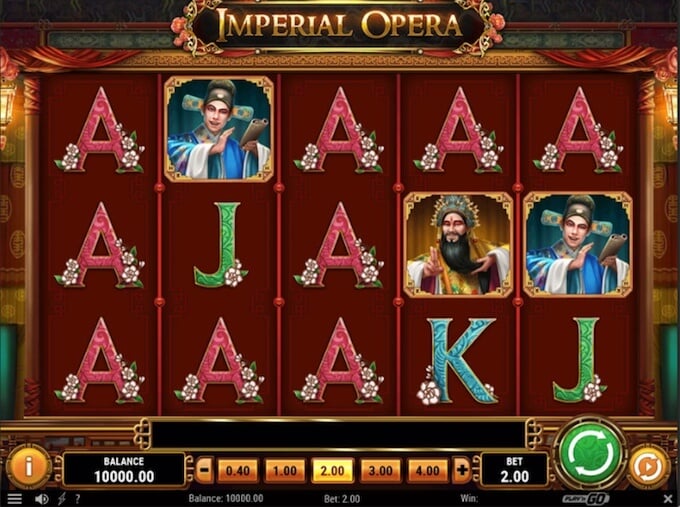 This slot has a rewarding Showcase feature which results on every spin. A symbol is chosen at random and a stack made up of this particular symbol will be added to the reels. All the character symbols can also land as Mega Symbols when some features are active, to reward you with an even bigger win.

The base game also has a Harmony feature, which is triggered randomly. During this feature, two or three adjacent reels are selected at random and display the same symbols when they spin. Imperial Opera slot also has another randomly triggered feature, the Crescendo feature, where one or two reels will be randomly selected to display wild symbols which will cover the entire reels.

The free spins round in Imperial Opera slot can be triggered once you land a large free spins scatter symbol on the reels. This scatter is a 3×3 symbol that appears across three reels and awards players with 10 free spins. During this feature, the 3 middle reels lock and spin together to display the same symbols, and Mega symbols can land on these reels. If you manage to land on the free spins scatter again during this round, the game awards you with another 10 free spins, and this can go on indefinitely, or until you reach the maximum win! 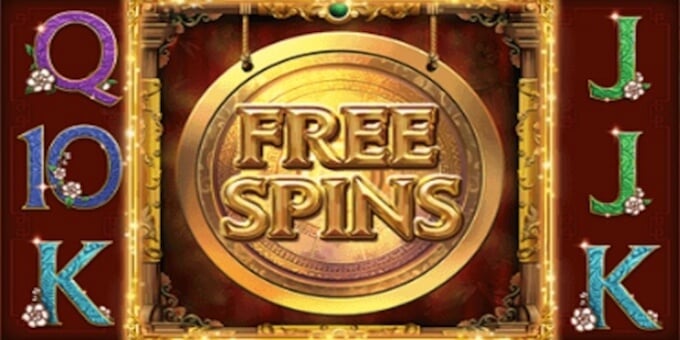 If you’re tempted to try out Imperial Opera slot this March, then might as well claim a casino bonus, for there are bonuses aplenty at online casinos these days. In order to benefit from the best ones, we’ve prepared a list of online casinos that offer Play N Go slots as well as a good welcome bonus for new players. To play this game, simply click on the links below, create an account and browse for Imperial Opera slot in their game browser after the 7th of March 2018.

Where to play Imperial Opera slot

Once it’s released, UK players will be able to play Imperial Opera slot by staking as little as 20p and up to £100 per spin on all devices. The slot has an RTP of 96.5% and its volatility is quite high. It’s likely to be at its most rewarding during the free spins feature if you manage to land the premium symbols as Mega symbols, and the maximum win you can expect will be 2,500x your bet.

Imperial Opera is played out inside a nicely decorated opera house and features some detailed graphics, especially if you look closely at the elaborate Oriental characters and the flowers that adorn the card symbols. A gentle Oriental tune accompanies the spins, whose rhythm picks up during the free spins round to reflect the extra dose of excitement.

We liked Imperial Opera slot for its entertaining gameplay and those additional base game features. There will be a lot happening during the base game, so you don’t have to wait for the free spins round for the excitement to kick off. The free spins feature itself can of course be significantly rewarding thanks to the synchronized reels, and we think that overall Play N Go has done a good job of developing what looks like a classic Oriental slot with a few extra bonuses, and that this slot is an improvement on its Oriental Prosperity Palace slot released last year, which was rather lacking in features. Try it our for yourself this March at Play N Go powered casinos, and don’t forget to claim a deposit bonus if you’re new to an online casino!