Coins of Egypt is an online slot from NetEnt. Read our review below to learn about this game's Pharaoh Coins Win Feature and more. 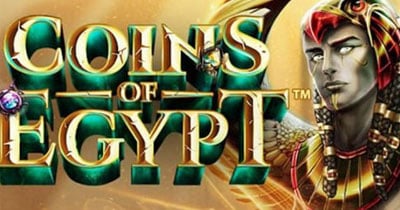 It’s been a while since NetEnt released Coins of Egypt slot exclusively for Betsson Group, and this may be the reason why the game hasn’t exactly been all the rage when it was released across all NetEnt-powered casinos this autumn. Still, Coins of Egypt slot is a high RTP slot with high-quality graphics which conveys the splendour and mystery of ancient Egypt, and this, coupled with the originality of its bonus features, places it among the best Egyptian-themed games on the market. Read our full review of Coins of Egypt slot to learn more about its features and to start enjoying it at your favourite online casinos!

Coins of Egypt is a 5-reel slot with 20 paylines set against an ancient Egyptian temple, guarded by the god Horus to the left and Anubis to the right. Symbols on the reels include 5 differently coloured scarabs, scorpions, and the gods Wadjet, Anubis, Bastet and Isis. The latter is the most rewarding symbol, and pays out 75x the stake for a 5-symbol combination. There’s also a Wild symbol, which is the Golden fly; this substitutes for all symbols except the scatter, the chest seal and the special ‘collect’ symbols. The wild also rewards you with a payout of 150 times the stake. 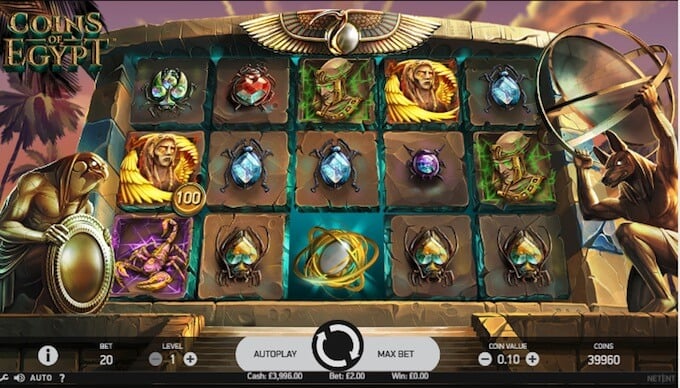 During the base game of Coins of Egypt slot, you can trigger the Pharaoh Coins Win feature – in this case, 1 to 3 coins with prizes of between 2 and 15 times the stake will appear on the first three reels on each spin (1 coin for each reel). All these coins are collected and added to the payout for any wins you obtained from the current round if a collect symbol happens to land on the fifth reel. Unfortunately, it’s not a base game feature that you can expect to activate often, given that you need both a win and a collect symbol on the 5th reel for it to have its effect.

Coins of Egypt slot comes with a Free Spins feature which is triggered when 3 scatter symbols land on reels 1, 3 and 5. You now get an unspecified number of free spins, as the duration of the round depends on how long it will take you to land on three identical seals that correspond to three chests: the Ruby Eagle, Emerald Snake and Golden Cat chests that are now visible beneath the reels. First, the total value of all coins on the triggering spin are added to each chest at the start of the round. During the free spins round, up to 3 coins can appear on reels 1, 2 and 3 on every spin, and each time their values are added to the corresponding chest. As you spin, you’ll be able see the value of each of these chests, which show how much will be added at the end of the feature if you complete the round with that chest. 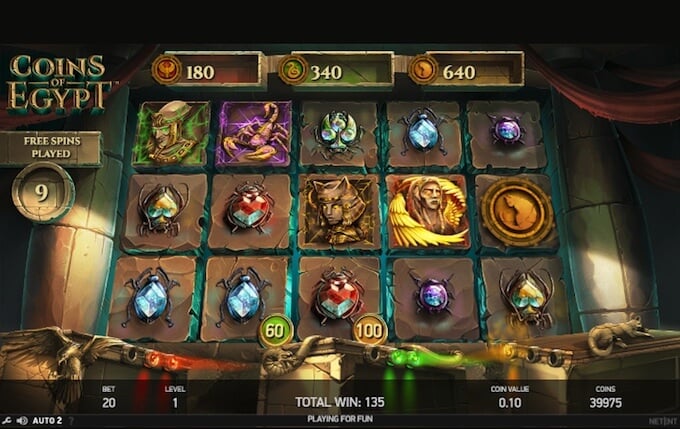 To ‘complete’ a chest, players will collect from 3 chest seal symbols which will land on the fifth reel. Only one chest seal can land on each free spin, and sometimes none at all (which is good news, because it simply means more spins!) When players collect 3 identical chest seals, the free spins round will come to an end. This is when the amount of coins in the chest they’ve filled up will be added to the total winnings. Unfortunately, the free spins round cannot be retriggered, however the round can last for quite a while, especially if you keep landing on different chest seal symbols on the fifth reel or if you get a number of spins without any chest seal symbol.

Sounds complicated? Coins of Egypt slot does have a rather different payout structure, but we’re sure you’ll quickly get the hang of it once you start spinning. If you’d like to test it out with some bonus money first, we suggest joining a new online casino and claiming a welcome bonus. You can play Coins of Egypt slot at the casinos we recommend below, which also welcome new players with a deposit match bonus.

Where to play Coins of Egypt slot

You can play Coins of Egypt slot by staking from 20p to £200 on each spin. The game has a good RTP of 96.97% and volatility is low to medium. The hit rate is pretty good, with the exception of the Pharaoh Coins Win feature. Of course, the best wins in Coins of Egypt slot are to be had from the free spins – you can win up to 274.5 times your stake, which is not an incredible amount, but good given the good hit rate.

Coins of Egypt comes with some impressive visual and sound effects that constitute one of the highlights of this game; it’s lovely to watch the symbols come to life as you form wins with them, and to hear the sound of trickling coins. The soundtrack is perfect to create that sense of suspense, and this is heightened by those powerful sound effects that give you the feeling that anything can happen in this ancient Egyptian temple!

Coins of Egypt slot – our Conclusion

There are a lot of perks in Coins of Egypt – from the graphics to the lengthy free spins round which leaves you with additional coin wins, we’re sure this game will provide plenty of entertainment and that it will appeal to a very wide audience. Of course, it’s not the game to go for if you’re after a massive jackpot or if you prefer high volatility slots, but apart from that, it’s rather low risk given its good hit rate and RTP.

If you love slots inspired by the history of ancient Egypt, we also recommend Betsoft’s latest release, Max Quest Wrath of Ra, which will also amaze you with its unique form of gamification. Maybe it’s the mystery and danger that ancient Egypt inspires in us, but it seems like this theme is only getting more and more popular lately!