Quickspin has once again come up with a highly volatile robot-themed slot with a great win potential. 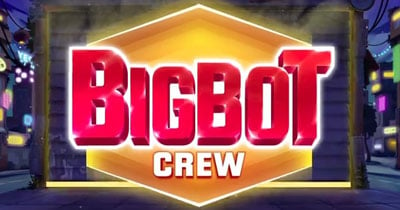 Today we’ll review a high volatility offering by Quickspin that seems to have great win potential, and which will also attract those techy geeks out there; Bit Bot Crew is a 5-reel slot with one main attraction – the Bigbot robot that functions as a very rewarding wild!

Read our review of Bigbot Crew slot below before you join robot builders Matsuo, Danielle and Joaquin on your hunt for big wins, and find out which online casinos are already offering Bigbot Crew as part of their portfolio.

Big Bot Crew is a 5-reel slot with 40 pay lines set in a futuristic metropolis which is home to three techy teenagers who like to build robots.

Symbols include four differently-coloured cogs, two robots and the three teenagers, with Matsuo being the most lucrative symbol that gives you 7.5 times the stake for 5 in a line.

There’s also a wild symbol, in the guise of the Bigbot humanoid, which appears only on the three middle reels in the base game to replace all symbols except for the scatter.

The BigBot is four reels high and may either land partially or cover one entire reel to lead to some higher wins.

If this Bigbot symbol lands fully on two or more reels during the base game, this will lead to the respins feature and players are awarded one respin for each full Bigbot Wild during the previous spin.

Wilds will remain locked in place in this instance, and if another Bigbot wild lands during this feature, an additional respin will be awarded.

We particularly liked the fact that a BigBot symbol which lands only partially on the reels can also nudge itself up into place to cover the entire reel and lead to the respin, and that this can also happen again during the respin feature.

The Bigbot Crew free spins feature can be activated by landing on 3 bonus scatters on the second, third or fourth reel.

Players will then get 8 free spins coupled with a few perks.

The Bigbot wild can land on all 5 reels in the free spins game, and during this round, all the bigbots are guaranteed to nudge in place and lead to a win.

Once they’re activated, these wilds will also remain on the reels throughout the bonus, and players will get an additional free spin each time a Bigbot Wild lands on the reels.

This makes it possible to fill up an entire screen with these wilds and unlock the game’s maximum payout.

Looking for some extra funds to try out Big Bot Crew slot? It’s very likely that you’ll be able to play Bigbot Crew with a casino bonus if you sign up as a new player with an online casino.

A lot of UK casinos reward players with a deposit match bonus which will be a percentage of their first deposit, and which they can then use to play any of the slots offered by the casino.

Check out the ones above, which are already offering Bigbot Crew slot to play for free and for real money.

This RTP is set at 96.58%, and the game is highly volatile, and it’s being compared to Sakura slot by the same developer, although its volatility is even higher.

The win potential is particularly attractive, at 5,203.2x the stake, yet this can only be achieved if you land a screen full of wilds during the first free spins round, which we believe is highly unlikely.

Bigbot Crew slot comes with very sharp graphics that do justice to the robot theme.

The background music is upbeat yet chill at the same time, and the visual and sound effects are pretty much what you’d expect of any Quickspin slot – pretty unimpressive during the base game, yet the excitement picks up significantly during the special features and free spins round, as the soundtrack becomes more adventurous and fast-paced.

Big Bot Crew is pretty straightforward, but it comes with great potential to lead to some big wins, both during the base game and the free spins round.

The latter, however, was very difficult to trigger, and when we did activate it, we didn’t land as many Big Bot wilds as we hoped for and didn’t make a significant win – in fact we won more thanks to the basegame respins.

Maybe it was just our luck, coupled with the fact that the slot is extremely volatile.

Try it out for yourself at one of the casinos we’ve recommended on this page, and make sure you check out their welcome bonus if you sign up as a new player!