The Grand is an online slot from Quickspin. Read our review below to learn about this game's nudge reels, free spins, and more. 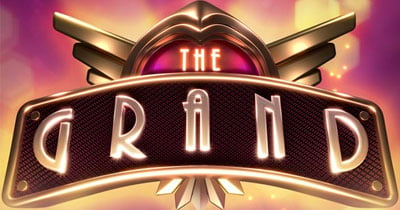 Quickspin’s next release is a fabulous-looking slot full of glamour, reminiscent of Hollywood’s Golden Age; The Grand slot features 214 ways to win, a free spins bonus, synced reels and more! Read our full review of The Grand to learn what’s in store for you if you decide to give it a spin, and to find out which online casinos will be offering it as from the 12th of March 2019! 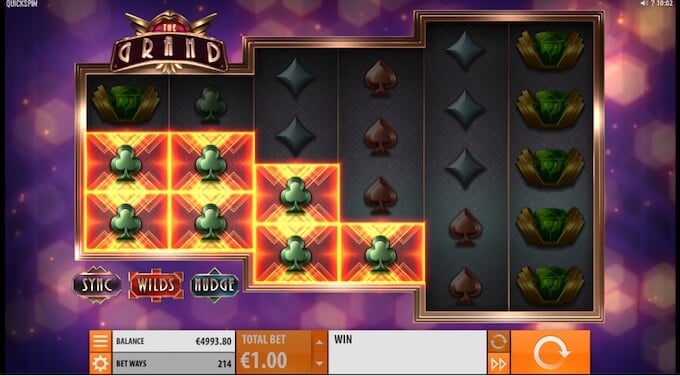 The Grand is a 6-reel slot with 214 ways to win, with a rather unusual reel setup: Starting from the left, you’ve got 2 reels with 3 symbol positions, followed by another 2 reels with 4 positions each, and finally another 2 with 5 positions. Symbols include the the traditional hearts, spades, diamonds and clubs, purple and green gems and a scatter.

As you play The Grand slot, you can expect to trigger 3 base game features at random on any spin. These include:

The Synced Reels feature – up to 6 reels will sync and stop on the same position.

Random Wilds: 4 to 8 wilds will be randomly placed on reels 2 to 6 to help you form more winning combinations.

Nudge Reels: up to 3 reels may be nudged to lead to a higher payout. 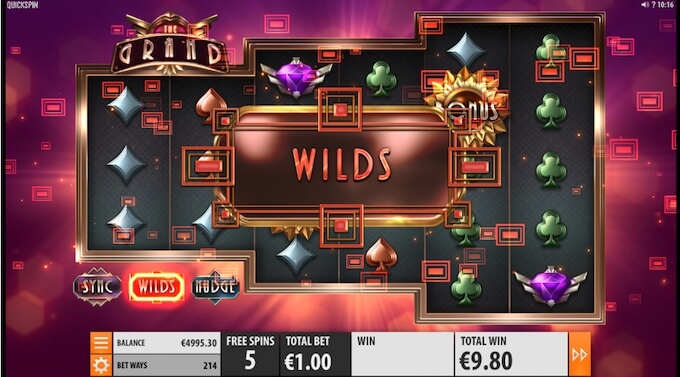 Landing on 3, 4, 5 or 6 free spins symbols as you play The Grand slot will give you 6, 9, 12 and 15 free spins respectively. During this round, the 3 base game features can also come into play, and 2 or 3 features can combine to give you bigger wins!

Last but not least, bonus symbols can land during this free spins round, on reels 3, 4 and 5 only. If you get 3 of these, this will trigger the GRANDomizer feature, unlocking either the Synced Reels, the Random Wilds or the Nudge Reels features and giving you 1, 2 or 3 extra spins. We found out that the GrandDomizer feature is not too hard to trigger, and that it could lead to a much longer free spins round than initially expected!

Are you a bonus hunter? If you’d like to try out The Grand slot with some bonus funds, we suggest joining a Quickspin casino that offers a deposit match bonus or that runs promotions on Quickspin games. You will get a percentage of your deposit in bonus funds, which you’ll be able to use on any slot, including The Grand (as from the 12th of March 2019!). 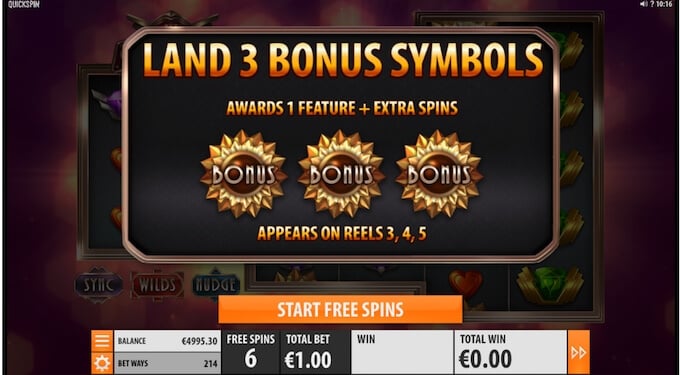 Where to play The Grand slot

Players from the UK can play The Grand slot by staking from as little as 10p up to £100 on each spin. The theoretical RTP is set to a decent 96.58% and volatility is quite high (as expected from most Quickspin slots). If you’re lucky, you can win up to 2900x the original stake as you spin on this game!

The Grand slot graphics and sound

Visually, The Grand looks superb with its Art Deco design and that touch of glitz in the background. The graphics are sharp and appealing, and the gameplay is complemented by great ambient music, interrupted by powerful sound effects as you land on winning combinations and trigger the game’s various features!

The Grand slot – our Conclusion

This is a great-looking slot with the potential to appeal to a large player base. Quickspin seems to have created a game that is straightforward enough without lacking in features. That said, the game’s Nudge and Sync features are not as rewarding as we were led to believe initially, and it can take a while to trigger the free spins (which is where you’re likely to pocket the biggest wins). Given the volatility, the maximum win potential is on the low side, and there are better paying games by Quickspin which we would recommend trying (such as the recent Ticket to the Stars that may pay out a whopping 9,700x the stake!) Try playing The Grand slot with a bonus first before you decide whether the game is worth playing with real money, or discover the great selection of games that this developer has to offer!