Join the prince on his quest to release Rapunzel from her tower, and unlock rewards along the way in the form of free spins, re-spins and multipliers. 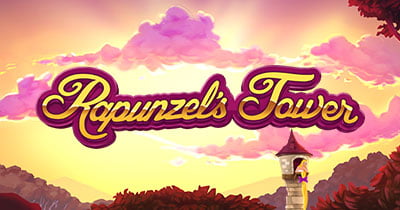 We’re pleased to announce that one of the first slots to be released by game developer Quickspin, Rapunzel’s Tower slot has recently been given a makeover so that it now features enhanced graphics and a much more rewarding gameplay!

If you like the sound of this, keep reading our review below to learn more details about Rapunzel’s Tower slot and to find out which online casinos have started offering its new version as from December 2017!

Rapunzel’s Tower is a 3×5 slot with 20 paylines that brings back to life the fairtyale of long-haired Rapunzel who has been locked inside a tower by an evil witch.

Symbols include the high-paying wicked witch holding a pair of scissors, the prince, the king and queen, Rapunzel herself and the traditional lower-paying card symbols from 9 to Ace.

This slot features 2 types of wild symbols, one of them in the guise of the standard Rapunzel wild, which comes stacked and substitutes all other symbols apart from the scatter, and the other one featuring Rapunzel’s hair tied up with a ribbon, which functions as a Bonus Wild.

This Bonus Wild can land on reels 2, 3 an 4 and will trigger the slot’s re-spin feature if at least three of them appear. During this re-spin feature, the wild symbols remain fixed in place as the re-spin plays out.

The great thing about this feature is that these respins will continue until players land a winning combination!

Not only have Quickspin included the beloved free spins feature in Rapunzel’s Tower, but they’ve also enhanced it with another innovative bonus that you’ll look forward to with great anticipation!

Landing on 3 or more Tower scatter symbols during the base game will trigger a total of 10 free spins, but the fun doesn’t necessarily stop here! Players can win more free spins via the Tower Feature, which may be activated during this free spins round.

Every time a Bonus wild appears during this feature, you’ll get to watch the prince climb up the tower from the outside, as he gets closer to Rapunzel.

Players will be rewarded with up to 8 additional spins along the way, as follows:

If you’d like to give Rapunzel’s Tower a try, might as well do so with the help of some additional bonus money, to improve your chances of winning!

Sign up with one of our recommended casinos in order to get a casino bonus with your first deposit, as well as regular offers on Yggdrasil slots like Rapunzel’s Tower.

You may now play Rapunzel’s Tower slot by betting from 20p to £200 per spin.

Rapunzel’s Tower has medium volatility and has the potential of paying out over 1,600x your stake with each free spin.

The reels in Rapunzel’s Tower are set against a forest backdrop, and players can see Rapunzel looking out from the tower to the left hand side.

The card symbols are designed in an elegant old-style font, and the character symbols are cartoonish and vibrant.

The game is accompanied by a gentle and relaxing soundtrack, and enhanced by magical sound effects whenever you land on wilds and trigger bonus features.

Rapunzel’s Tower is a beautifully designed slot that conveys the enchantment that’s so inherent to this popular fairytale.

We liked this slot’s re-spin feature in particular, for guaranteeing a win every time it’s triggered.

But given the fact that there are many slot games that include a 2x multiplier as a standard feature during their free spins round, we did find that in Rapunzel’s Tower this reward is rather disproportionate with the effort  – or should we say, with the good luck – of having made it to the top of the tower.

Nevertheless, Rapunzel’s Tower is worth a try and will appeal to anyone who’s after some magical wins.

Try out all of them with one of our online casinos to also get a bonus, and have fun!