We’re thrilled to announce another upcoming release by NetEnt which will definitely not be your typical kind of slot: Asgardian… 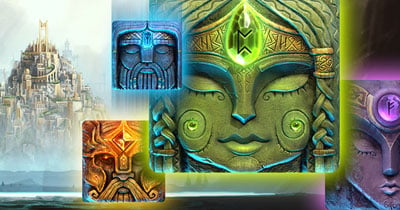 We’re thrilled to announce another upcoming release by NetEnt which will definitely not be your typical kind of slot: Asgardian Stones slot is inspired by Norse mythology, and will be set in a world ruled by powerful gods that may give you access to colossal wins! Learn more about this game’s rewarding features, including its avalanche mechanism and bonus wheel, by reading our review; we’re sure that after you find out what NetEnt’s got in store for you, you’ll be dying to try out Asgardian Stones once it’s released on the 22nd of February 2018!

Asgardian Stones is a 5×3 slot with 20 fixed bet lines, featuring ancient stones that avalanche to destroy the ones below them and form winning combinations. Symbols on the reels include low-paying Q, K and As and stones carved in the image of 5 different Nordic gods, with the highest paying one being the God of Fire. There’s also a wild symbol, which displays a big W, and which substitutes for all symbols except for the Bonus Wheel. 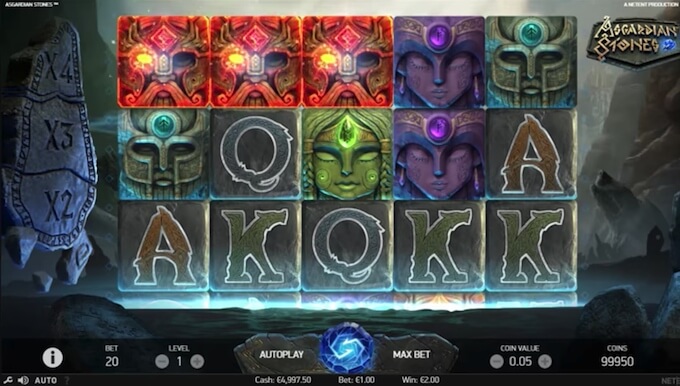 As you ‘spin’ the reels and land on winning combinations, you’ll see the symbols drop down from the top, creating an avalanche. Getting another winning combination triggers another avalanche, so that this keeps on happening until you get no more wins.

After the avalanche, the game’s colossal crush feature may also be randomly activated, causing a colossal symbol to randomly crush the symbols beneath it. With every row that is crushed by this symbol, the multiplier increases by one, which can result in a maximum multiplier of 4x. This feature continues until the Colossal symbol lands at the bottom of the screen, or until there are no more empty places underneath it.

The way to trigger free spins in Asgardian Stones is via the 3×3 Bonus Wheel that may appear on reels 3 to 5. This bonus wheel can land very much like the other symbols, either fully or partially. As it spins, it may award coin wins of up to 5x your stake, free spins or both! 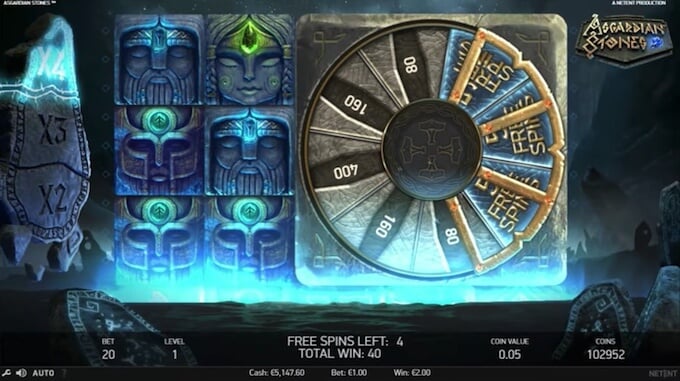 Players can initially be awarded a maximum of 15 free spins in Asgardian Stones. During this free spins round, the slot’s Wild symbol can also land as a Colossal Wild, which is split into 1×1 wild symbols if it forms part of a winning combination. If the Wild symbol doesn’t lead to a win, it remains on the reels until you don’t get any wins.

During the Asgardian Stones free spin feature, players may also reactivate the Bonus Wheel, for up to 3 times! This can lead to winning a total of 25 free spins, which is certainly not bad considering that colossal wilds can appear during this spins!

If you can’t wait to try out Asgardian Stones for real money once it’s release, then we recommend you find a good casino bonus to cut back on losses and have a greater chance of landing on a couple of colossal wins! Being a NetEnt slot, you’ll find Asgardian Stones across the majority of online casinos once it’s released, and many of them are likely to also give you a handful of free spins on this slot. So make sure to check their different welcome bonuses or promotions to make sure you play only with the best!

Where to play Asgardian Stones slot

Once released, UK players will be able to play Asgardian Stones by betting from 20p to £200 per spin across all devices. The game has been classified as one of medium volatility, with a decent RTP of 96.31%. Lucky players can win a maximum of 2000x their stake thanks to the game’s multiplier feature.

NetEnt have once again done a very good job at conveying the slot’s theme very powerfully through the way it is designed. The symbols have been conceived with certain detail to look like ancient carved stones, and the atmosphere created by both the music and the graphics is one of mystery and suspense. The soundtrack has a mytical feel to it, and the sounds of the stones being dropped and crushed create more suspense and serve to immerse you fully into supernatural adventure. 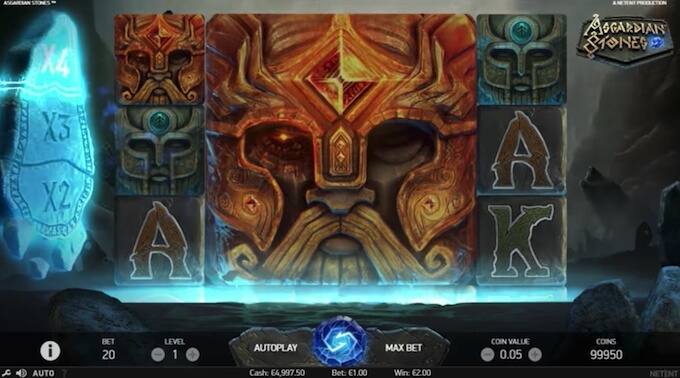 From what we’ve seen so far, it really looks like NetEnt’s Asgardian Stones will be a unique and fast-paced slot that will satisfy those with a hankering for adventure and variety. We love the fact that the bonus wheel can randomly drop down in both the base game and free spins round, the rewarding multipliers and the overall design and aura created by this slot, and we’re sure you will too. So make sure you stop by again towards the end of February 2018, when you shall be able to play Asgardian Stones at one of our recommended online casinos. Take up the challenge and step into the realm of gods, for that’s where the best rewards are!