Deal or No Deal: What’s In Your Box

Another popular UK TV show has made it to the reels at online casinos, and we can’t wait to find… 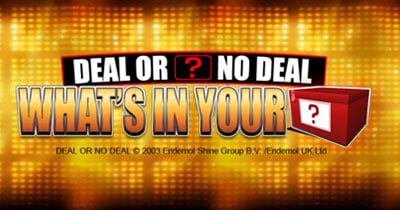 Play Deal or No Deal: What’s In Your Box here

Name
Deal or No Deal: What’s In Your Box
Provider

Deal or No Deal: What’s In Your Box review

Another popular UK TV show has made it to the reels at online casinos, and we can’t wait to find out what’s in our Box! Blueprint Gaming has recently released Deal or NO Deal What’s in Your Box slot, a branded game which has also made it to 16th place on the list of top 20 slots on the January iGaming tracker slots rankings. With 5 bonus features and a progressive jackpot up for grabs, we thought it’s certainly worth taking a look at this game in more detail – so here’s our review to help you understand how Deal or No Deal: What’s in Your box slot works!

Deal or No Deal: What’s in Your Box slot features

Deal or No Deal What’s in Your Box is a 5-reel slot with 20 paylines designed to provide plenty of entertainment with its multiple features. Symbols on the reel set inwclude J, Q, K and A, notebooks and pens, mugs, envelopes and boxes. There’s also a wild symbol, which is the phone, that replaces all symbols except the bonus symbol and also pays out up to 500 coins. In Deal or No Deal slot, you can win on multiple paylines at once, and wins from different lines will be added together to form a total win. At the top of the reels, you’ll also notice panels displaying the games’ jackpots – in fact, Deal or No Deal: What’s in Your Box is part of the Jackpot Kind progressive network, and is linked to three jackpots: the Royal Pot, the Jackpot King and the Regal Pot. 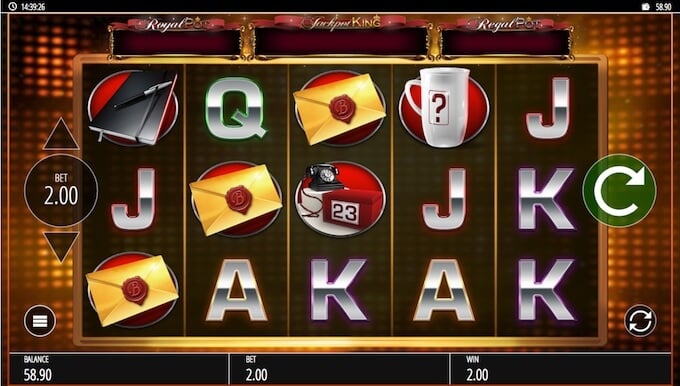 Randomly during the base game, you could benefit from the Banker’s Bonus – in this case, the reels will start shaking and the phone will ring to award the DOND Boxes. Players will then have to pick a box that will award one of the below features:

Random Wilds –  a number of symbols will turn into wilds as the reels continue to spin.

Mystery Symbols – a number of Mystery Symbols (?) are added to the reels. The reels then stop, and the same random symbol will be revealed behind each mystery symbol to help you form winning combinations.

Respin Streak – If a win is achieved on the reels, there is a chance of a Respin Streak. The winning symbols are held in position and all non-winning reel positions respin. If any symbols land in view that would create a new or larger win, these are also held and the reels respin again. This continues until no new wins are created.

Bonus Respin – some or all of the reels can respin to help you create a win.

Deal or No Deal slot bonus and free spins

Of course, this slot will most appeal to those who love bonus features – there are 5 of them in total, which you can access by landing 3 or more Deal or No Deal boxes on the reels. The feature you get can be any of these 5, and if you’re not happy with it, you can choose to deal. In this case, you’ll either get a more rewarding feature or you’ll get a cash prize that most likely will be less than the value of the initial feature. The following are the bonus features you can access:

Go All the Way Bonus feature – you get the DOND boxes with two cash ladders (blue and red) on each side. Then, players will have to pick a box, which will reveal either: ADVANCE BLUE, ADVANCE RED, GO ALL THE WAY BLUE, GO ALL THE WAY RED or TAKE A PRIZE. The player continues selecting until they reveal a TAKE A PRIZE, following which he’ll get a final box selection – TAKE BLUE (awarding the player the blue cash ladder value reached) or TAKE RED (awarding the player the red cash ladder value) or BANK THEM BOTH (in which the player will bag the total of the two points reached on both cash ladders!).The player exits the feature with the amount awarded!

Trail of Wealth bonus feature – you’ll get to roll the dice and move along a board. As you progress, you’ll collect Total Bet multipliers, Banker’s Seals and Mystery Wins. The phone will awards the Banker’s Spin, which can award a current Total Win multiplier, Walk of Wealth where you move around the board once collecting prizes, a Mystery Bonus Prize as well as Banker’s Seal or Super Trail Of Wealth. Collecting 3 Banker’s Seals triggers the Super Trail Of Wealth – in this case, the board will change and will include Super Multipliers as well as Mystery Positions, Mystery Win boxes and Banker’s Bonus positions. This feature continues until the player reveals the COLLECT option from the Mystery position. At the end of the feature, the player exits the bonus game with the amount displayed in the Bonus Winnings panel.

Seal of Success Free Spins feature – you’ll get 10 free spins played on a new set of enhanced reels. IF you collect 3 envelopes, one of the high paying symbols will turn into a wild, and 5 extra free spins will be awarded for every symbol that is transformed!

Deal or No Deal slot bonus

Sounds complicated? We admit that it is, though you’ll quickly get the hang of it if you start spinning. If you’d like to play Deal or No Deal What’s in Your Box with some bonus money first so as not to risk any of your own, we suggest playing it with a casino bonus first. At the moment, the only casino we can recommend where you can play this game is William Hill. This casino also welcomes new UK players with a 100% buy-in bonus up to £300, which you can use on its massive collection of slots!

Where to play Deal or No Deal: What’s in Your Box slot

You can play Deal or No Deal by staking from 20p up to a risky £500 on each spin. This game is best suited to those risk-takers, as RTP is 92.60% and volatility is medium to high. You can expect to trigger the base game features and even the bonuses themselves quite often, but it will take a while to bag the biggest rewards. That said, excluding the progressive jackpots (which can amount to over £1 million), you can win up to £500,000 while playing Deal or No Deal What’s in Your Box slot! 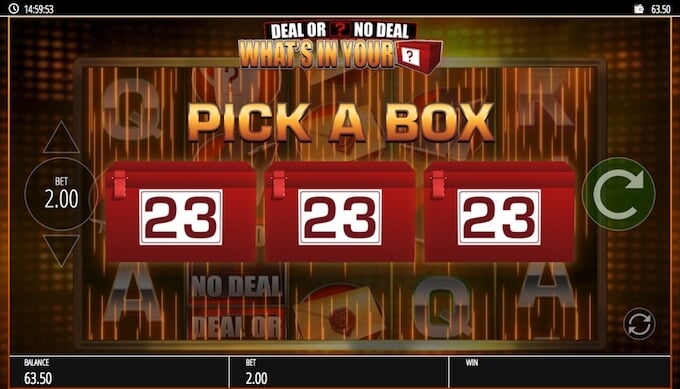 Deal or No Deal What’s in Your Box slot jackpots

During any spin in this game players will be in with a chance of winning the Jackpot King Bonus which is triggered by landing 5 Jackpot King overlay symbols on reels 1 to 5. Players will then spin the reels to accumulate Crown symbols and move up the win ladder. To enter the Wheel King section of the feature, they need to achieve 15+ Crown symbols.

Deal or No Deal slot graphics and sound

Deal or No Deal slot comes with sharp graphics and an attractive colour scheme with red, yellow and black as the predominant colours. The disco-style music in the background adds that entertaining vibe to the game, although it can get a bit repetitive if you play for too long!

Deal or No Deal: What’s in The Box slot – our Conclusion

This is one action-packed slot that’s ideal if you can’t get enough excitement – we like the mix of bonus features and the great win potential, but would caution against getting too carried away if you play it for real money – it’s tempting to just keep spinning in the hope of unlocking more features, but this can really drain your bankroll especially if you’re staking high amounts! If you’d like to play another branded game inspired by a popular TV show, we also suggest checking out the recent Who Wants to Be a Millionnaire Megaways slot by Big Time Gaming – at the best online casinos, the entertainment truly never stops!